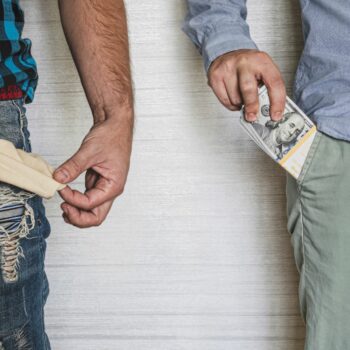 Let’s Talk About the Wealth Distribution Gap in the USA

It’s no secret that in America today, the wealthiest fraction of the populace is accumulating more money than they could ever hope to spend while the poorest die in poverty.

In fact, it’s common knowledge. But despite the horrifying facts of the matter and the incredible human cost, not much is getting done about it.

Billionaires are blinded by their wealth and out of touch with their compassion. Politicians consider tax hikes on the rich people who fund their re-election campaigns more important than the suffering and death of their constituents and neighbors.

Individuals view poverty as a moral failing, clinging to their delusional American dream of one day becoming a millionaire.

Even some out-of-touch nonprofits can continue to benefit financially as long as the causes they campaign for are never actually solved.

We need to break out of this downward spiral, and the first step is facing the facts.

A Look at the Numbers

The top 1% wealthiest people in America now hoard more than 30% of the entire country’s wealth. After increasing by $12 trillion during the pandemic, their total combined holdings reached a record $45.9 trillion at the end of 2021.

The top 10% own 69.8% of the country’s wealth, leaving just over 30% of the dollars to unevenly sprinkle over the bottom 90% of people like the world’s saddest cash grab machine.

And somehow — not by chance, but by deliberate misinformation — the people getting the blame for this are not the ridiculously wealthy, sitting on their hoards like literal dragons, watching the rest of us struggle to secure our scraps. Rather than banding together to take care of the big, rich elephant in the room, we’ve been conditioned to fight amongst ourselves as though the poorest and least powerful people in our society are the source of the problem.

Racist myths like “welfare queens” and “immigrants stealing the jobs” take up the majority of the conversation and misdirect attention away from the real problem — rich, powerful people using their infinite money to remain rich and powerful.

We’re more concerned about the morality of poverty and what character failure could have landed someone in that predicament than we are about the morality of having all the resources required to solve a humanitarian crisis and making no move to do so. Surely ignoring human suffering and death just so you can watch your six and seven-digit numbers tick up and up and up is worse than any nefarious backstory you’ve made up for the unhoused person on the corner.

How Does Wealth Inequality Cause Homelessness?

If you’ve been reading here long, you’ll know that it’s not at all uncommon for unhoused people to hold down one or more jobs and still not be able to afford housing. This is because wages are low and housing costs are high.

We’ve come to this point after decades of wealthy capitalists maximizing their own profits by cutting wages to their employees and raising the rent on their investment properties. This pattern will continue because greed is limitless. And most politicians are unwilling to pass legislation to correct this exploitation for fear of their own funding drying up.

With the facts all laid out like this, you would think it would be obvious that billionaires are a drain on society. But because of their influence and self-interest, the wealthiest among us have put considerable effort into perpetrating certain myths that keep us from showing up at their mansions with pitchforks and guillotines.

The first is the American Dream and the accompanying idea that anyone can achieve anything as long as they “work hard” and pull themselves up by their bootstraps. This overly simplistic view ignores systemic barriers while at the same time glorifying rich people as superhumanly hard-working when that’s usually not warranted. To continue the metaphor, not everyone can afford bootstraps.

There’s also the idea that we can’t redistribute wealth more equitably because people need incentives to prevent them from becoming complete couch potatoes. This is simply not true, which anyone who’s ever had a hobby knows. Have you seen how much work a gardener does entirely without compensation?

This myth also fails to consider that incentives can be more than financial. Outside of capitalism, for example, a common incentive for hard work is community-based. If you don’t get a sense of personal satisfaction out of the rote work that just needs to get done, you may do it anyway in service of your community. Why? Because that’s what needs to be done, and you’re someone who can do it.

While capitalism and colonization have largely destroyed our sense of community, we can still get a glimpse of this dynamic within family units when it comes to housework and other care tasks.

A million more myths like this permeate our culture and are taken for granted. It would behoove us all to second-guess them.

First of all, we need to stop falling for the lines the wealthy are feeding us.

The American Dream is dead, and poorer people are not our enemies. It’s the richest among us who are leeching our resources with impunity.

You can always talk to your legislators about reducing wealth inequality and limiting the power of money in politics. Depending on where you live, it might be a hard sell.

In the meantime, dig into your community. Support each other. Get to know people you wouldn’t normally talk to and see if they have any support needs that you can meet.

Start looking for ways to connect with local organizers and mutual aid groups. If we want change, we all need to band together. It will take every ounce of our collective power to be heard over the rich and powerful people who would much prefer everything stay the same – or worse. If we can’t eat the rich, we might as well tax them.

Some 4.2 million children and young adults experience homelessness each year. These youth are at exceptionally high risk of becoming victims of sexual abuse, sexual exploitation, trafficking in persons, and sex...

Living With the Fallout of a Family Breakdown and Subsequent Homelessness

“I really miss my dad today. More than usual. I know that if he were still here, still alive. If they were still here, I wouldn’t be going through any of this.” It’s a familiar statement that echoes throughout the...

Homelessness has many faces, stretching millions of miles across the country and, for that matter, across the globe. Frequently, as advocates, we pose the age-old question of why our fellow human beings have been forced...

Living With the Fallout of a Family Breakdown and Subsequent Homelessness