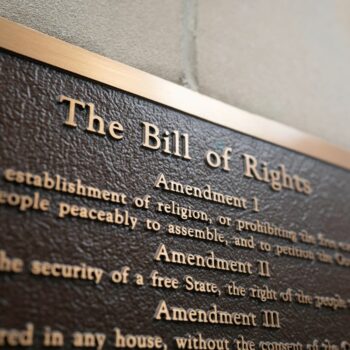 Three States Have Enacted Them, and Five More Could Be on the Way

A “Homeless Bill of Rights” may sound redundant in a country that dedicated its first ten Constitutional amendments to laying out the unalienable rights of its citizenry.

While it’s true that unhoused people are technically covered under this Bill of Rights, it’s also true that those so-called “unalienable” rights are frequently infringed upon whenever the powers that be feel like they can get away with it. Even something as simple as not having a mailing address can prevent people from accessing and exercising all of their rights.

Houseless people who spend the bulk of their energy every day just securing the necessities of survival often have little left to fight back against unjust treatment or struggle against a biased system to exercise the rights they’re supposedly entitled to. They need more protection and more people watching with compassion and amplifying their voices.

That’s where the idea of the Homeless Bill of Rights comes in.

What Does a Homeless Bill of Rights Prevent?

A Homeless Bill of Rights is a response to the fact that homeless people all across the country (and the world) are subjected to greater harassment and discrimination simply because they are homeless. Because of this greater vulnerability, greater protections are needed to keep people safe.

If you’ve never experienced homelessness firsthand, you might not realize how frequently the basic rights we take for granted are denied to our unhoused neighbors. This ranges from simple things like being able to sit down in a public park undisturbed up to huge, life-changing things, like being able to return to our place of residence reasonably sure that it hasn’t been torn down and destroyed along with all of our belongings or pets.

Laws allowing for encampment sweeps and preventing unhoused people from simply existing in supposedly public places are repeatedly questioned by our legal system and international human rights organizations. Yet, they keep cropping up in one form or another in cities and states across the country. Enacting a Homeless Bill of Rights sends a clear message that a local government will no longer look the other way when the rights of any of its residents are violated.

Which States Have a Homeless Bill of Rights?

So far, Rhode Island, Connecticut, Illinois, and Puerto Rico have successfully enacted legislation and created a Homeless Bill of Rights locally. Puerto Rico passed its law in 1988! There are also proposals to do the same in California, Hawaii, Oregon, Vermont, and Missouri.

The existing bills vary a bit in their specific language. But in general, they all seek to affirm the following rights for unhoused residents. The right to:

As you can see, many of these items make explicit rights that these people were already entitled to but are frequently ignored by law enforcement personnel and others due to their housing status. The Homeless Bill of Rights is a reaffirmation of these rights that provides additional legal protection, adding more friction to the previously all too smooth process of denying people their rights on a whim.

Some states with proposed legislation are considering adding language to secure powerful new rights for homeless residents, including a right to housing. Suppose that language makes it through to the final versions. In that case, I’m sure we’ll see some Olympic-level NIMBYs bending over backward trying to explain how not everyone deserves housing – for their own good, of course, or some other nonsense.

Is All of This Actually Helping?

The passing of a Homeless Bill of Rights can be a powerful symbol challenging the stigma against homelessness that has been rampant for decades. But is that all that it is?

It’s a bit too early to tell, since results so far have been mixed. Puerto Rico’s Homeless Bill of Rights was broad in scope and has had some difficulty enacting its plan, while Rhode Island’s 2012 bill was more modest and judicially enforceable. Subsequent states have followed the Rhode Island model more closely when fashioning their bill proposals.

As with anything in politics, legislators are challenged with the task of striking a balance between provisions that materially improve the conditions of everyday life for the intended targets and submitting a bill proposal that will be not only accepted as law but ultimately enforceable in practice. Right now, it seems to be a game of baby steps.

The best way to ensure that your attempt at helpfulness is actually helping is to constantly contact the people you’re trying to help and incorporate as many of their suggestions as possible. Meeting with unhoused people in your local area before proposing a Homeless Bill of Rights, taking their input while crafting its specific language and priorities, and amplifying their voices as they live under its effects should be the minimum standard expected of any legislative office seeking to implement such a policy.

The process of successfully implementing a Homeless Bill of Rights, particularly in a hostile political environment, necessarily involves a lot of public education and frequent corrections of misinformation and incorrect preconceived notions. This focused, determined chipping away at the stigmatized public conception of homelessness and homeless people may make the greatest difference in the average unhoused person’s day-to-day life.

The good news is that this education and correction of harmful stereotypes is something you and I can do daily, wherever we discover it, regardless of our local politicians’ willingness to implement a Homeless Bill of Rights. I encourage you to do so.

Related Topics Your support can create amazing change Join the campaign to end homelessness by supporting the only newsroom focused solely on the topic of homelessness. Our original reporting — posted five to seven days...

Study Confirms Pitfalls in School Graduation and Attendance for Students Experiencing Homelessness in Canada According to Canada Visa, the Great White North boasts an impressive literacy rate, with 90% of adults aged 25...

Now Serving Poverty When people say, “autumn is in the air,” they’re generally referring to crisp, breezy sweater weather, the scent of crumpled, colorful leaves underfoot, and the phenomenon of pumpkin spice everything...