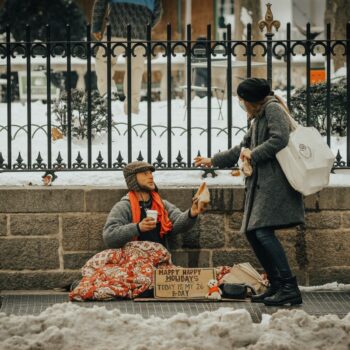 Learn How You Can Best Help Homeless People During the Cold, Winter Months

One afternoon I was sitting alone on a snow-covered bench in front of the Harlem Meer. Just sitting there quietly as the snow fell around me. I remember thinking it was beautiful, a moment I often remember.

At that moment, there was nothing but frost and my thoughts.

Soon after Thanksgiving, the park erected a big Christmas tree in the middle of the Meer. It lit up at night. Sometimes I’d sit there at night, with nothing but the sound of my breath, and look out at that twinkling Christmas tree, and I’d just forget – I’d forget all the bad stuff for a moment.

I felt the most alone when Thanksgiving rolled around.

It felt the loneliest while I was homeless. As the season progressed and it got colder, I felt lonelier as the Christmas decorations went up around the city. Seeing others head out early on Christmas morning to see their families was difficult.

One morning, as I headed downstairs into the lobby to sign for my bed, I saw a flyer on the wall for a fancy Christmas dinner for homeless people. The problem was seating was limited.

Spending the holidays homeless is incredibly hard as if being homeless wasn’t already hard enough.

As a formerly homeless person with homeless friends, I urge you to reach out to your poor and homeless friends, family, and community members during the holidays. Do what you can to make them feel loved and cared for. For some, that may be volunteering at a soup kitchen. But there are so many other things you can do.

Give a warm pair of socks (this still brings me comfort, even now).

When I was homeless, friends and loved ones asked me for a wish list (such as an Amazon wish list) or directly asked me what I needed. My list mainly consisted of winter clothes and gift cards to the Dollar Tree.

I once had to ask a friend to buy me an electric stove burner because the ones at the shelter kept disappearing overnight. But the written Christmas cards really made the biggest impact on me. It was just words scribbled on a card, but it meant the world to me to receive mail and to have a friend who cared about me at a time like this.

When the chilly air comes, I remember my ex-landlord shutting off my heat weeks before the eviction and freezing in my apartment. I remember that trek I made in the snow, from the in-take center to the first homeless shelter. In the middle of the night, I walked miles through slippery slush and ice. I was so terrified I could cry.

First, I was terrified that there wouldn’t be a bed that night, then I was terrified of where I’d be placed. But relief eventually came when I walked in those sliding doors. I believed for a second that things would be okay. The water in the bathroom was so hot. I soaked my feet in the tub that night and cried. When another friend sent me a pair of snow boots, I was so excited and happy I laid in bed with them on for hours.

Appropriate footwear allowed me to get outside, to get food, and it provided me with mobility I could rely upon through the cold months. Needless to say, it was a big deal.

According to Invisible People’s article “What to give homeless people in the cold,” blankets and clean winter clothing to fight the bitter cold are highly recommended.

One of the best ways to help homeless people during the cold months is to donate winter items. This includes appropriate footwear, but it also includes coats, hats, scarves, and blankets.

Another suggestion is donating directly to shelters or other organizations that meet with homeless people. This will ensure that your donations get into the hands of homeless people quickly.

Speaking from personal experience, I recommend reaching out to homeless individuals directly about their needs. The best thing you can do is talk to them and listen. You’re more likely to meet the needs of a homeless person by speaking to them directly and offering them money. Starting that conversation shows you care and respect them.

Just because someone is homeless doesn’t necessarily mean you can easily assume what they need. They may have access to food but need socks. They may need money for public transportation or a toothbrush.

Invisible People also reminds us that giving money to homeless people is okay! Below is a short story about why direct cash donations are so vital to many homeless people:

“A homeless friend once shared a story about when he needed a toothbrush. He stood in front of a grocery store displaying a sign asking for money to buy the toothbrush. It wasn’t long before people started to give him food. He gratefully accepted multiple bags of fast-food meals as he tried to collect money to buy a toothbrush. He set the bags next to him. Although it was clear he had already been given food, people continued to give him more. He never was able to purchase the toothbrush he needed.”

“In this situation, my homeless friend was clearly communicating his need. But the givers either were not listening or chose not to because they have been told not to give money to panhandlers. The thing is, with food stamps a person cannot buy toilet paper, toothpaste, a toothbrush and other hygienic needs. It takes money.”

If you’re up for it, offer them money or ask if there is anything they’d like you to do. Starting a conversation is also a step toward connecting them to a shelter or warming center. If they need help getting inside, you can refer them to a nearby intake or drop-in center. The NYC Department of Homeless Services provides a pocket guide of all DHS intake centers and drop-in centers.

This is why communication is an important part of homeless outreach. Not only do we better serve the homeless community this way, but it also helps us bridge that gap between homeless people and us. It eliminates the otherness that often leads to discomfort, fear, and negative stereotypes.

At the end of the day, we’re all just people wanting much of the same things – to be seen, to be heard, to be loved.

It’s hard for most people to discuss homelessness without discussing mental health. Even though only one-fourth of homeless people have serious mental health conditions such as schizophrenia or bipolar disorder...