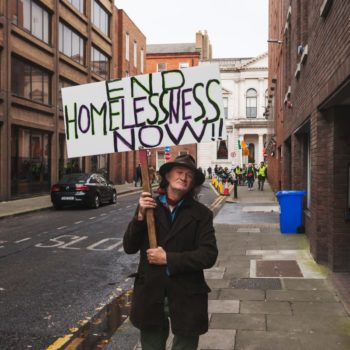 Because It’s Not a Lack of Resources

When we talk about homelessness with the average person who hasn’t looked into it much, the general feeling is that it’s an unfortunate circumstance, but what can be done? There’s just too little to go around.

We’ve largely accepted this ongoing humanitarian crisis as a fact of life, the natural result of too many people on a too-small planet. We’ve come to think of the people who will die out on the streets each year, when we think of them at all, as acceptable losses.

Most people don’t realize that we have all the resources we need to end homelessness right now – we only lack the collective will to do so.

What Causes Homelessness, and What Are We Doing to Stop It?

It’s no great mystery. People become homeless when they stop having access to affordable housing. This is the primary cause, far eclipsing any other. It hinges on three parts:

No matter the amount of housing we have available or the programs designed to make it affordable for everyone, if those resources can’t be accessed easily, they won’t make much difference.

For example, the current Housing Choice Voucher program is designed to combat the increasing unaffordability of housing. It works by providing vouchers to low-income families that allow them to pay 30% of their income toward rent while the federal government picks up the tab for the rest.

Landlords still get to line their pockets nicely. And people get a safe place to live. Everyone’s happy, right?

Well, no. Even if landlords were free from the prejudices that make them reluctant to rent to families with these vouchers, AND they all kept their housing in good repair, only a quarter of eligible households ever actually get their hands on these vouchers.

This is the tamest possible solution designed to work within the limitations of our current system. It doesn’t ask for revolutionary change or even for landlords to consider decreasing their profit margins. And yet it is still failing 75% of the people it’s supposed to help because of arbitrary budget limits. There’s been an effort to expand this program recently, but the increases so far have only been incremental.

We could painlessly fund this program and then some with the money currently being given out in tax breaks to homeowners. But we haven’t done even that. Which is a human right? Housing, or a reduction in capital gains taxes resulting from the sale of a home?

The solution to homelessness is housing for all. It’s going to take more than vouchers to achieve this. Yet we’re unwilling to take even this baby step.

People like to complain about seeing people sleeping on the streets during their daily commute to the office. You would think that there would be a lot of demand for new housing to be built, if only for the sake of clear sidewalks.

Cities with the tightest barriers against new construction, like New York and San Francisco, are also the cities with the highest populations of unhoused people. Meanwhile, Japan employs permissive building policies and has a very low level of homelessness. It’s not a coincidence.

Even with mixed-income developments, real estate developers are largely unwilling to take on projects that deliver anything but the maximum possible profit. Building safe, affordable homes in the areas where people want to live and can secure employment requires government subsidy. And while local governments are somewhat more responsive and willing to find solutions, the costs of the necessary interventions are often out of their budget.

The federal government could afford to house all homeless people with just a small cutback in its daily aircraft carrier habit. But it is slow to respond. It’s also always at the mercy of politicians trying to score points and shave margins while lives are on the line.

Then there are the privately wealthy, uber-billionaires who could fund all of this without noticing they did. Why they’re content to live in luxury while others suffer from a simple lack of money, only they can answer.

At this point, corporate greed is so entrenched in our culture that the simple act of imagining a future where we didn’t have to pay rent is a revolutionary act that sends people scampering out of the woodwork to call you some kind of socialist. On the other hand, you may have had your own disillusioning moment when you realized the necessities of human survival are being held behind a paywall. I, for one, am surprised that the air we breathe is still free.

Rent is not a fundamental law of the universe. It doesn’t have to exist.

But with the amount of resistance there is to simple solutions like having our government provide a basic safety net that benefits all of society, we’re nowhere near ready for that conversation.

There is no way to sugarcoat this. Many people deep down believe that people who are homeless deserve to be so. Few people would recognize this belief in themselves. Even fewer would ever admit to it out loud. But, it’s all too evident in the way they behave – both in action and inaction.

They readily accept living conditions for unhoused people they would never willingly accept for themselves. Then they get offended if they perceive the recipients to be insufficiently grateful for the crumbs they’ve been offered.

Housed people campaign to push homeless people out of public spaces we all share an equal right to. They often succeeding in cutting off one person’s access for the other’s comfort.

They imagine homelessness as the result of bad personal choices rather than the systematic failing that it is.

And in doing that, they absolve themselves of any responsibility to try and help.

The Aboriginal and Torres Strait Islander peoples have inhabited the landscape now referred to as Australia for tens of thousands of years, effectively making them the region’s first residents. These First Nations...