When You Live Unhoused on the Road 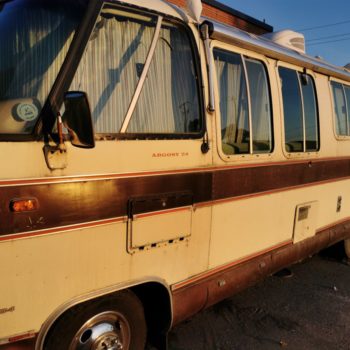 Living on the road, with an ancient camper as my only form of shelter, besides a tent, had its unique challenges. My ‘home’ required gas, parking, water access, and somewhere to dump the waste tanks. My ‘home’ needed an engine that worked and tires that had tread. A dead battery was dangerous, especially when someone aggressively demanded that we move on. A blown tire was the end of the world. No one who lives in their vehicle out of necessity has money to repair and replace things, and we were no exception.

Cops jump on a missing back license plate with a paper printout from the DMV in its place, like it is the crime of the century. Out-of-date tags are like a red rag to a bull. With no address, the simplest vehicle-related paperwork becomes an intractable problem.

Without the money for camping, sneaking around to find a spot is the only option.

It is expensive to be homeless, paying to live and rest daily. Campgrounds generally have two-week stay rules that they rarely waive, not even for people with children, who are quiet and considerate campers. Even when we could pay, having found a cheap campground for about $7 a night, we would be moved on after our two weeks were up.

We were constantly looking for places to camp and stay. Cheap, safe primitive campgrounds with open spaces provided a measure of safety. However, the rules state that for every two weeks that you stay, you must not try and pay to camp there for the following two weeks before you will be allowed back in.

We often faced staying in parking lots and rest areas. Apart from the fact that the owners or security of these large empty spaces don’t want anyone stopping, not even to sleep for a few hours, it is bearable.

It is not easy to wait for that knock and the shout of “you have to move, you can’t park here!”

There cannot be a car in sight. Even if you are far out of sight in an empty parking lot, an overly enthusiastic person with authority will come storm trooping out. They seem to want to tear you apart for the mere act of existing as they smash on the side of your “home” with their fists screaming for you to leave. They threaten to call the dreaded cops on you if you don’t, and no one wants that.

Not even churches will let vehicle dwellers park in their often empty lots. And they don’t show any more compassion than a grocery store does.

Living in a vehicle is not freedom.

It is a constant battle against the elements, against police who want to bust you for living in your camper or car and question you. It’s as if they have never heard the song “This land is my land, this land is your land.” There is no compassion or understanding for the fact that things are not quite that simple. There are a lot of threats and no help offered.

When we set off from Los Angeles, my friend had saved two thousand dollars. It was every last cent he had in the world. He sold his guitars and put fences up cheaply for people who had land to enclose. He scraped every cent he could together to try and help me.

Knowing we were finally safe, watching my son run happily was worth it. No one would hit me, hurt me, rape me, or threaten to kill me. Running to safety was a huge risk, and it was worth taking.

I drank coffee from my tin cup, boiling water on the little gas camper stove. I watched a coyote walk down to the lake. After a few days, I pulled some books out of the overhead cupboard and did some schoolwork with the boy. Things seemed possible.

Money makes things feel that way. Having utilities, safe camping, enough food, and the security of not being moved on because we were legally camped, makes a huge difference. A working engine, decent tires, and up-to-date tags also help.

We ran out of money somewhere up in Washington State.

We only got 10 miles to the gallon. If we were trying to do the same thing today, living in a camper would be impossible at current gas prices.

Camping is incredibly expensive, around $31 a night even in state and national campgrounds. That soon adds up. It is impossible to maintain long-term without a significant enough income. The reality of not having anywhere to go hit home when we pulled into the Walmart parking lot for the first time.

Keeping clean is not easy. We had to steal showers at campgrounds and access state park wastewater RV dumps late at night. So very little – free camping spots and occasional access to utilities would have made such a difference to our lives for the five years we lived outside.

If we had the option of safe camping or vouchers to stay on campgrounds and live relatively comfortably in the camper and my tent, life would have been so much better. We met many children living in campers and tents with their families, many of them in campgrounds when their parents could afford it.

It always made me so angry to see tourists come and take camping spaces. They pushed out those who lived outside while their homes were sitting empty. I had to move around parking lots, rest areas, and remote boondocking spots, trying to simply survive.

These vacationers played at my life and then went back home to beds and showers and roofs that didn’t leak. Meanwhile, I struggled to educate my child, feed him, and keep him dry and safe.

When the weather turns bad, it is a constant struggle against the elements. Rain drips down into beds, getting past tarps and through leaky camping equipment. It is freezing, and when the snow falls, it becomes almost dangerous. Everything gets wet. Batteries run out of lights fast, and nights are spent in the dark, huddled around whatever light source there is.

I know it sounds naive of me, churlish even. But I often thought of how many unhoused people could be safely housed in campgrounds, close to bathrooms, showers, electric and clean water. On a few occasions, kind people paid for us to have a break from being chased around parking lots and camp for a few days.

There is occasional kindness, too. Sometimes another would pay for our spot and their own, so we could stay instead of leaving after a shower.

Everyone needs shelter. Everyone needs somewhere to be. Being moved on constantly, never able to stop, settle, feel safe, and rest, is exhausting. Time is used up by trying to find somewhere to sleep, leaving no energy for anything other than simple existence.

Think of all the amazing things people could do with their lives, all the positive things if society helped people have somewhere safe to camp when they have nowhere else to go.