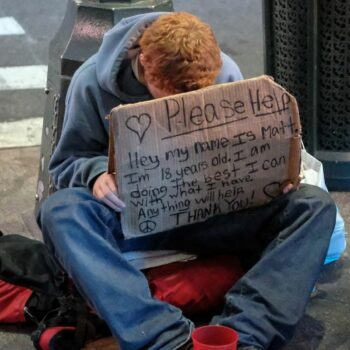 Whenever homelessness is mentioned, the phrase “mental health” is not that far behind. From media to literature, internet searches to intimate conversations, we are constantly reminded of the link between homelessness and mental health. We are told that mental illness is a gateway into the underworld of living unhoused. It is…

However, many advocates are unaware that the story doesn’t end there. Further investigation reveals that mental illness is less of a gateway into homelessness and more of a revolving door.

Firstly, it should be duly noted that emotional disorders are not the root cause of homelessness. Our failure to adequately address, treat, rectify, and understand mental illness is the true reason that some people suffering in silence wind up suffering outside — without a stable residence, without a safe space to call their own.

Secondly, not every unhoused individual suffering from emotional disabilities entered into homelessness in such a distraught emotional state. Falling into homelessness is such a traumatic experience in and of itself that simply living through it can cause irreparable trauma, which may later emerge in various forms of PTSD.

Posttraumatic Stress Disorder and Its Myriad Connections to Homelessness

Posttraumatic stress disorder, more commonly known by the acronym PTSD, is defined by The American Psychiatric Association as “a psychiatric disorder that may occur in people who have experienced or witnessed a traumatic event, series of events or set of circumstances.” This mental disability is most often associated with military veterans and has been prevalent in the past under several synonyms such as “combat fatigue,” “shell shock,” and the like.

People with PTSD develop lingering adverse emotions after exposure to something shocking or traumatic. PTSD shows itself through four distinct, mood-changing symptoms. They are as follows:

This symptom consists of flashbacks, nightmares, and vivid mental recognition of the initial trauma. When a person living with PTSD undergoes intrusion, they effectively relive their nightmare through vivid recollections so lucid they seem to be real. Sometimes such events are driven by “triggers” that take the form of words, actions, objects, or scenarios that remind the sufferer of the alarming experience.

To evade the flashbacks and painful memories, many people living with PTSD opt to avoid these triggers altogether, which can have significant impacts on their quality of life. Imagine, for example, if you had PTSD following a car crash and the only way to avoid flashbacks was to never again ride in a car. How many buses would you need to get to work on time? What would you do if you usually drove your kids to school? Etc.

When PTSD is severe, it can change how a person perceives themselves and the world around them, leading to a dark cloud of negative perception that follows them everywhere they go.

The fourth symptom of PTSD is hyperarousal, an overinflated state of responsiveness that causes extreme anxiety. Hyperarousal sometimes shows up through angry outbursts or increased irritability but can be a subtle shift in heightened awareness that makes it nearly impossible to concentrate.

The National Alliance to End Homelessness reports that PTSD is connected to homelessness in several ways, including:

One or more of these conditions might exist at the same time.

For example, a war veteran could become homeless after suffering from episodes of PTSD. Becoming homeless could then exacerbate posttraumatic stress disorder causing this individual to become reclusive, anxious, or irritable. While having a flashback, that same person might be cited for the alleged “crime” of being homeless and be further traumatized when they are arrested. But that is not the only way it works.

In an alternative scenario, a person could become homeless after losing their job and being evicted. They could enter into homelessness without any emotional disabilities. Perhaps they find a silver lining in living on the streets, and even becoming homeless does not alter their mentality. But then, while experiencing homelessness, this person is viciously attacked by a stranger who sets their tent on fire, rapes them, and attempts to take their life, which is a highly plausible scenario if they’re unsheltered. This event could cause them to develop PTSD, and the illness might not show itself for years. A decade later, this same person experiences a vivid flashback during a camping trip.

Below are the Most Common Traumas That Cause PTSD During Homelessness

For individuals and families who fall into the desolate state of homelessness without any mental disabilities at the initial crisis, an increased risk of developing PTSD is immediately prevalent. Here are some of the most common traumas that homeless people experience (or witness) that cause posttraumatic stress disorder:

Going from having a home to not having a home is one of the most traumatic situations anyone can endure. This alone is known to cause a lifetime of mental health conditions, including PTSD.

Researchers note that it isn’t just the physical condition of having no safe, stable residence that leads to trauma. Also, and perhaps more importantly, is the anguish of losing one’s social position amongst family and friends combined with the sharp and sudden reality that danger lurks around every corner.

Once thrust into homelessness, people who have already been previously traumatized might find it even more difficult to cope.

Witnessing or enduring a violent attack

Studies reported by the University of California show that people experiencing homelessness are statistically more likely to be violently attacked. One study, in particular, showed that as many as 48% of homeless women were victims of physical violence.

The researchers followed participants for several years only to learn that many were attacked repeatedly, a pattern that did not subside until they were placed into permanent housing.

A small study conducted in Oakland, California, consisting of 350 participants, found that 57.4% of homeless adults over 50 were missing at least half of their teeth. Tooth loss and gum decay are highly prevalent in the homeless community.

A separate study of homeless children between the ages of 5 and 9 found that 95% had an unfilled need for dental care. Not only is losing teeth proven to be as psychologically daunting as losing other body parts but trauma itself is now proven to cause tooth loss in later life.

Speaking of losing other body parts, houseless people are statistically more likely to lose limbs due to an increased risk of diabetes and increased exposure to hypothermia and frostbite.

Losing children to the system

According to the Institute for Children, Poverty, and Homelessness, “at least one study reports that childhood foster care is 34 times higher for families experiencing homelessness than the general population.”

Imagine waking up with half your smile missing, not drooped into a frown but lost forever, a simple gesture you find useless now that everything is gone.

Imagine the pain of watching your infant or toddler being forcefully removed from your arms merely because you cannot afford a place to live.

Imagine your first night on the streets, you are violently attacked, and you narrowly escape with your life. You try to push away the pain, but it keeps replaying.

Sometimes it is a new nightmare happening in the shadows in real time. Other times it is a flashback of a previous attack. And while you are reliving every painful jab and consequence, someone points a crooked finger in your direction and proclaims that your homelessness results from mental illness.

Half-truths are a whole entire lie.

Talk to Your Legislators About Ending the Cycle

Many aspects of homelessness are cyclical in nature, making it difficult to determine whether a condition is a result of homelessness or a root cause. Talk to your legislators about ending the vicious cycle by making housing a human right for all.

National Poverty Awareness Month is observed annually in January. So, it seems appropriate to follow up on the Topline Findings from the U.S. Administration on Community Living (ACL)’s 2021 Annual Profile of Older...

A group of 40 Denver-area nonprofits is calling on city leaders to stop sweeping homeless encampments during freezing weather, according to a letter sent to the city council on January 9. The letter comes after multiple...

The Average Person Who Experiences Homelessness Lives to Just 47 Years of Age Even If They Eventually Become Housed As we march headstrong out of 2022, 2023 promises to feature a new year, maybe even a new you. But what...