Why Do Homeless People Live Near Freeways? 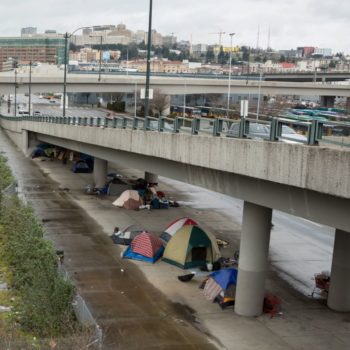 A common sight for travelers is homeless people close to freeways.

Groups of tents, known as encampments, are often under overpasses or in open areas near entrances and exits. These encampments are becoming more common, with reports of homeless people residing by the freeway doubling since 2017. It occurs so consistently across the country that it begs the question: why do homeless people live close to freeways?

After all, freeways are noisy, dangerous, and public. It may seem that the freeway is the worst place to live. However, this line of thinking only highlights how privileged housed people are and how far removed they are from the daily struggles homeless people face.

These locations have advantages and appeal. Even though the trend isn’t heavily studied or researched, homeless people consistently give the same responses when asked why they live there.

What Are the Dangers of Living Close to the Freeway?

There are some obvious risks to choosing this location to set up camp. Due to the proximity to cars and their high speeds, there’s the risk of getting hit by a car or hurt by a nearby accident. Police are called frequently, and pressure is put on the city to sweep encampments. Fires can also be a hazard, although they are oftentimes caused by external factors.

Living near the freeway also puts homeless people at risk for violent attacks. They’re more visible to those with little compassion for homeless people, so life becomes more dangerous for them. Due to increased visibility, NIMBYs are more likely to target homeless people because they are more concerned with hiding homelessness than finding solutions. NIMBYs will most likely publicize the location of the encampments and promote hate.

What Are the Benefits of Living Close to the Freeway?

With so many dangers for homeless people living near freeways, what reasons do they have for doing so?

This may seem like a paradox because of the apparent dangers like speeding cars. However, visibility also provides safety. Crimes like assault, theft, and vandalism are more likely to occur in areas with more privacy. Quiet parks and side streets are more dangerous than areas with cars constantly rushing by. While they are not technically protected, they are less likely to be attacked by a busy freeway overpass without people noticing.

White noise from cars rushing by provides several benefits. First, it allows for privacy. Living in a homeless encampment means little to no separation between you and those in surrounding tents. The white noise of traffic makes you less likely to be heard and less likely to hear others. It’s easier to imagine you’re somewhere more private when you and your neighbors cannot hear each other’s every move. Traffic noise can offer feelings of security and comfort.

White noise also promotes good sleep, which is hard to come by when homeless. Living in such an exposed manner means more vulnerability. Feeling constantly seen and heard contributes to anxiety and stress, making daily life more difficult overall. The constant rush of traffic helps to soothe these anxieties.

Living near the freeway resolves the problem of transportation many homeless people face. Panhandling can be a source of income, so this proximity allows them to spend as much time doing it as possible.

Being near a freeway usually means being near downtown. Social services such as shelters, food pantries, etc., tend to be in the densest areas of cities. Being close to these services also helps with the lack of transportation. Street outreach services may be more likely to reach homeless encampments that are nearby and visible.

This is straightforward—homeless people need protection from the elements, often more than a simple tent can offer if they even have one. Freeway overpasses offer protection from rain, snow, and the hot sun. The choice for shelter is simple when your options are under an expansive freeway overpass or the sky.

Spaces around freeways are universally unoccupied. They’re not in the way of anybody or anything. It’s a large open space with room for multiple campsites. Also, they’re typically near industrial areas, so they’re more likely to receive fewer complaints and be left alone by police.

In areas with an exceptionally high number of homeless people living near freeways and overpasses, there’s pressure on the city to “clean” encampments. This typically means sweeping them or throwing away the belongings of the people who live there. Calling on the city to clear camps because they give a poor image of the city only hurts homeless people.

There must be a goal to help homeless people, not just move them along. Incorporating rehousing programs and services when conducting sweeps is the most successful path. Cities like L.A. have created programs with specific goals and objectives to get encampment residents into permanent housing—not just shelters.

Many people believe there’s nothing they can do to help the homeless population in general. However, advocacy and compassion go a long way.

Think about the negative press homeless people get because of NIMBYs at city council meetings—fear-mongering and hate go a long way toward preventing progress. But it can work the opposite way, too. Attending these same meetings with compassion for homeless people and supporting the programs that make a difference can counter the damage that NIMBYs cause.