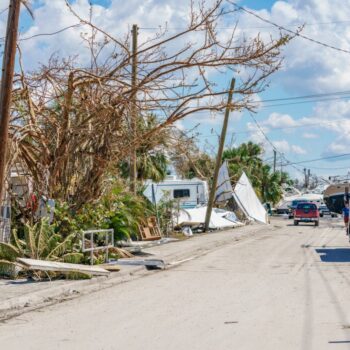 Climate change continues to threaten all of humanity, but none so much as people who are already homeless or just a few paychecks away from homelessness. In the wake of Hurricane Ian, with many still reeling from the wreckage of Hurricane Fiona, several glaring realities have come to light on this subject. Some of the most pressing weather-related issues at hand are:

Escaping the Storm Can be an Arduous Task for People Living Unhoused, Particularly Those Who are Unsheltered

If you think the worst thing that can happen in a natural disaster is losing your house or perhaps even your loved one’s life, remember that many homeless people have already lost their houses and loved ones. Indeed, some were even made homeless after a previous storm.

Two men made homeless by eviction found themselves floating on an air mattress in their futile attempt to evade Hurricane Ian. Their journey is symbolic of the obstacles many unsheltered people face when an emergency forces the prospect of relocation. The two men experienced several setbacks, including:

As you can see, evacuation without proper funding, information, and preparation inclusion can lead to near-lethal encounters with fierce storms like Ian, Fiona, and Danielle. Fortunately, these two homeless men off the coast of Florida narrowly escaped with their lives, but not much more, given that they are both still homeless. Others, however, are not always so fortunate.

“Intersecting Hazards, Intersectional Identities: A Baseline Critical Environmental Justice Analysis of Homelessness” is a research study expounding on seven years of observation, including but not limited to the examination of more than 385 organized houseless communities across 19 states nationwide.

Throughout the study, participants, all of whom were homeless, discussed the environmental injustices they endured while living without homes. Several participants mentioned that they were denied FEMA assistance before, during, and after natural disasters, presumably because they were homeless.

Further scrutiny reveals that individual applications for FEMA grants require several items houseless individuals and families do not usually have at their disposal. In FEMA’s own words, those who should apply for assistance are “homeowners, renters, and business owners in disaster-designated counties.”

This language alone excludes houseless individuals who are neither renters nor homeowners. In most cases, with a few exceptions, they are not necessarily business owners either.

Furthermore, the application states that FEMA must verify identity to disperse emergency funds. While presenting the proper legal documents for this process might sound simple, people residing without homes often lose their legal documents during robberies, assaults, encampment sweeps, and, in a bitter twist of irony, storms like the one they need FEMA funds to escape.

According to PEW Research Center, this leaves them “trapped in a vicious cycle.” Even if a houseless person could successfully complete a FEMA grant application, they would need to continuously review their application status on the internet and be prompted to provide a current address, phone number, and email contact to access their pending funds. Without those things, they would be excluded from the grants that are designed to aid in the following:

NPR says, “As Western Wildfires Worsen, FEMA is Denying Most People Who Ask for Help.”

According to NPR’s assessment, each year, the number of affected people the agency declines to distribute aid to increases. This is regardless of their housing status and indicative of what happens when we do not speak up for our neighbors without walls.

To shed some light on just how many claims are being canceled, in 2021, FEMA denied 70% of Oregon’s wildfire claims and 86% of California’s. While some of those denials might be attributed to fraud, the vast majority are likely the result of a nearly impossible application process requiring people who lost all of their belongings in a natural disaster to somehow recover a slew of legal documents and emerge from the ashes via an insurance claim is unlikely to clear.

Homelessness is Already a Disaster. Please Talk to Your Local Representatives.

As unnatural a state as homelessness is, it’s still a disaster for the people forced to endure it, no different than any other storm in the way it uproots and destroys all in its path. Contact your representatives about drafting legislation for the future that ensures everyone has a home.

This article was first published at Texastribune.org: Amid Rising Housing Costs and Relentless Inflation, an Increasing Number of Texans Are Struggling to Pay Their Rent and Stay in Their Homes Jade Barron doesn’t know...

I woke up on my 32nd birthday, made a cup of coffee, and opened my laptop to find an email forwarded from Mark, founder of Invisible People. It was written by a man in Ireland who had just read my piece from 2019...